Just moments ago ex-Stormy Daniels attorney Michael Avenatti was taken out of the California State Bar Court in LA the custody of federal agents. pic.twitter.com/cU8sM4DUw1

Just moments ago ex-Stormy Daniels attorney Michael Avenatti was taken out of the California State Bar Court in LA the custody of federal agents.

LOS ANGELES—Ex-Stormy Daniels lawyer and Trump antagonist Michael Avenatti was led out of the State Bar Court in Los Angeles by federal agents on Tuesday evening.

The arrest occurred outside the disciplinary hearing in which the State Bar of California has accused the hard-charging, tough-talking attorney of using a doctored document to scam a client out of nearly $840,000, funneling money from a lawsuit settlement fund to his own personal use.

The State Bar of California, the official attorney licensing agency, has sought to put Avenatti on “involuntary inactive status,” setting in motion a timeline for disbarment proceedings.

During a break in testimony, members of the United States Attorney’s Office for the Central District of California, who are prosecuting Avenatti in a separate criminal matter in Orange County, parleyed with Avenatti’s team of lawyers and took the lawyer into custody.

A source w/ the U.S. attorney's office in Los Angeles says that Avenatti was arrested for allegedly violating the terms of his pre-trial release on a case in which he is accused of extortion, theft of millions of dollars from clients, cheating on taxes and lying to investigators.

That dude is a dipshit

LOL at Avenatti! Karma’s a bitch right? Does this mean Avenatti won’t be on stage at the next Dim Debate? Maybe he can still run his campaign from his jail cell. LMAO!

Like the Party and their Goebbels Media that thought he would make a great presidential candidate.

Sooner or later his misdeeds had to bite him in the BUTT!

he was Brian Stelters fave for 2020

Yes and when you are watching and not participating in the karma, she is a lovely b***h.

How much does this help him secure the Donkey Nomination for President? 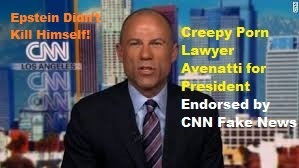 I guess these means he qualifies for the next Democrats debate then?

I’m not sure, I think you may have to be convicted of a felony first.

This is why Coke brand nosepowder is an awful substitute for Intelligence.

Wasn’t he planning on running for president? And isn’t this the same character that the left was drooling over. The twunts on The View seemed to get wet just thinking about him.

Which proves those four women’s brain together have a lower IQ than a cockroach.

The creme de la creme of the democrat field keeps disqualifying itself.

Born loser. Probably could have existed a couple rungs
lower and had a long dubious career. Soy-boy flew too close to the sun. Hahahaha

Hard to believe out of a million sperm that he was the fastest one!😂😂😂

It was the bald head. It cuts down on drag.

Still the most qualified of the Democrat presidential candidates. That’s how bad the field is.

At least Avenatti knows which town jail he is in on any given day.

This dirtbag suffers from the “I’m Untouchable” attitude he adopted from who he admires most, dipshit democrats.

Mix in the heavy use or drugs, whores and alcohol, sooner or later the party is going to be over and you will have some explaining to do.

I am sure with enough digging, you could find some political links backs to CA democrats.

How did someone like this come out of left field… ?

As we saw with the Kavanaugh hearings, it’s all made up orchestrated bullshit.

Hey he has real street cred now… He can still put his hat in the ring for the Dem nom. Even from jail🤣😄😂

“In the custody of federal agents.”
That has a real nice ring to it. It’s a nice start but we need to hear more.
He’s a low life scum-bag, let’s hammer a few of the bigger players.

As he was being led out in hand cuffs, Avenatti was heard to scream “Hey you can’t arrest me! I’m a Democrat! I’m Running For President! You are interfering in the 2020 election! j/k

At this point there’s gotta be a few Dems wishing he was actually in the race.
Anything to spice up the pathetic bunch still in the hunt.

what i love about this guy is that everyone hates him lol. very non partisan topic for us to all enjoy

I bet there are a bunch of Dims that still love the creep. Many Dims aren’t very big on law and order and stuff.

And CNN worship this guy what bunch of Morons.

They hired the criminal McCabe too. Progs love criminals. What they can’t stand is an honest man that can’t be bought. That’s what drives them crazy about Trump and why they attack him so much.

Stormy Daniels look just like that chick on NFL network..Lindsay Rhodes…they could be sisters…

Boy, if a liberal can get this much blowback for felonious crap, he must have pissed off a few democrat elites.

Aww darn! I was half expecting him to re-enter the Presidential race… … bwahahahaha

There must be a huge misunderstanding here… he’s a quality guy.

“Avenatti media” or “Avenatti TV” is an accurate term to describe all the television networks except for Fox.

All I can think about is how the media fawned over him… “president Avenatti?” And idiots still believe the drivel that leaks out of their mouths…

I suspect that no one is more impressed with him than he is of himself.

So satisfying to see this scumbag going down in flames.

I wonder if he hasn’t been diagnosed yet is bi-polar, and he is in the manic stage with thoughts of grandeur.

Probably still thinks hes going to be president in 2020

Look up “Ambulance Chaser”, in Webster’s, see pic of Avenatti!

The TMZ Schitthouse Lawyer Extrordinaire…I wonder when the “Twatteratti” from the View and other Skankettes from Cable News are going to post his bail again for him?

Remember when he was advertising for a First Lady, since he was so sure he would be President?

Well, when he gets to prison….he’ll be the First Lady.

According to Reliable Sources, he’s a serious contender for the 2020 Presidential nomination.

Wasn’t he supposed to be the CNN President?

That is the guy who is going to beat Trump in 2020…just ask Chris Matthews.

I wonder if he too fvkced Stormy Daniels?

The perfect example of why we need mental institutions.

Dems will have their kindred spirit, fellow conspirator and criminal back on the streets in no time.

I thought he gauranteed he and Stormy would get Trump removed from office? Howd that work out for ya?

I thought he was going to be the democrat candidate for the presidency? That didn’t work out, huh?

Mess with the bull & you get the horns!